Should you decline to agree to our terms and conditions, DEMOCRATIQUE.CA INC. politely requests

What you are about to see is the real story.
You will see exactly WHO IS pulling our elected officials' strings in LASALLE, and why.

THIS IS THE TRUE STORY THAT LASALLE'S ELECTED OFFICIALS NEVER WANTED YOU TO SEE.

Following many months of anticipation, it has been confirmed to Democratique.ca that our access to information request regarding

these VIP lists will be brought in front of a Quebec Acess to Information Commission. This should happen by the end of 2015, or early 2016.

Our intention has always been to demand that our elected officials in LaSalle divulge all V.I.P guests that they personally invite to events.

These events are always fully funded with taxpayer money that can be used to improve our city.

LaSalle mayor Manon Barbe, including all of our elected officials in LaSalle, have cordially

refused to divulge the names of their VIP guests invited to any of these political events.

Consequently, The Quebec Access to Information Commission is now investigating our case.

Rest assured that we will keep you fully informed as developments occur.

On May 4, 2016, following close to two years of investigation into the VIP lists of our elected officials in LaSalle,

The Quebec Access to Information Commission officially rejected our request for full disclosure of the VIP lists.

DEMOCRATIQUE.CA INC. is disappointed with the outcome but we have decided not to appeal the commission's decision.

In light of this, we have returned to the drawing board and have been tirelessly investigating every other legal option.

These VIP lists contain the names of all guests invited by our elected officials in LaSalle to political functions and parties.

These political events and parties take place in LaSalle and are funded EXCLUSIVELY with taxpayer dollars.

Unfortunately, the Quebec Access to Information Commission does not have the legal capacity

to force the borough of LaSalle to hand over these lists in this case.

The Commission also states that it was not presented with any solid proof that these lists exist in our case.

Consequently, the Quebec Access to Information Commission had no other legal option but to reject our request.

To read the Quebec Access to Information Commission's final decision, including the sworn statement

deposited by the City of Montreal in our case, please scroll down.

(NOTE: The decision and sworn statement are drafted in the French language)

As per the laws in North America, the burden of proof is everything. In this case, proof comes in the form of documentation.

With this said, one might ask, why did the Commission accept LaSalle's sworn statement in this case as the whole truth?

What hard proof did the Commission need to legally force the borough of LaSalle to divulge these lists?

If these lists truly do not exist (as our elected officials maintain), why would LaSalle borough mayor Manon Barbe

publicly state that she is unable to recall the names of everyone who was invited to these events as VIP guests?

Mayor Barbe, with all due respect,

Joseph Pugliese, DEMOCRATIQUE.CA INC. is not accusing you or the LaSalle borough council of any wrongdoing.

Absent VIP lists are one thing, forgetting who was invited to these VIP events you attended, is a whole other movie.

Even after being asked numerous times by Joseph Pugliese, DEMOCRATIQUE.CA INC. to divulge the names

The mayor was also unable to recall a single name of any random VIP guest, at any given event,

including her own VIP guests that she personally invited.

As for the rest of the LaSalle Borough Council, they also unanimously maintain that the VIP lists do not exist.

According to mayor Barbe's public statement "the names of her VIP guests are confidential information".

WHAT WE CAN SAY WITH CERTITUDE IS:

IT APPEARS THAT OUR ELECTED OFFICIALS IN LASALLE DO NOT DENY THAT PRIVILEGE, VIP PARTIES,

SPECIAL TREATMENT, AND VIP GUESTS, ALL EXIST IN LASALLE POLITICS!

What we are unable to grasp is why no one can remember who these VIP guests are?

ARE OUR ELECTED OFFICIALS IN LASALLE STILL PLAYING POLITICS???

How on earth can the borough of LaSalle control access and keep records of who has access to these VIP areas?

Absent any lists of invited VIPs, how did these mystery VIPs receive their invitations in the first place?

No mailing lists? No formal invitations in writing? No records of anything?!!

It is no secret that VIP guests are afforded security and special treatment along with our elected officials in these events.

There is always a designated private area where these special guests and our elected officials can freely socialize.

THE VIP AREA IS DESIGNED TO BE A COMFORTABLE AND SAFE ATMOSPHERE.

OUR ELECTED OFFICIALS AND their VIP guests require protection on designated VIP grounds.

SECURITY WILL NOT ADMIT ANY RANDOM PERSON INto THE VIP AREA WITHOUT valid verification.

SECURITY ALWAYS KEEPs TABS ON EVERYONE IN ANY GIVEN VIP AREA.

ANYONE THAT IS IN PROXIMITY OF OUR ELECTED OFFICIALS MUST BE ACCOUNTED FOR.

mayor barbe, insisting THAT THERE ARE NO VIP LISTS IS AN INSULT TO EVERYONE'S INTELLIGENCE!!!

to slip through the cracks in this case (FOR NOW) to read the judgment in its entirety.

The sworn statement that LaSalle Borough Hall deposited with the courts is EVERYTHING in this case.

in their sworn statement.

Regardless of the unfavorable decision, DEMOCRATIQUE.CA INC respects the court's decision and the legal outcome.

We would like to take this moment to cordially thank the Quebec Access to Information Commission for hearing this case.

Rest assured that we are following up on this VERY IMPORTANT CASE through other effective legal and media remedies.

WILL BE PUBLISHED IN DUE COURSE, EVEN IF TAKES YEARS TO COME.

YOU HAVE OUR WORD, 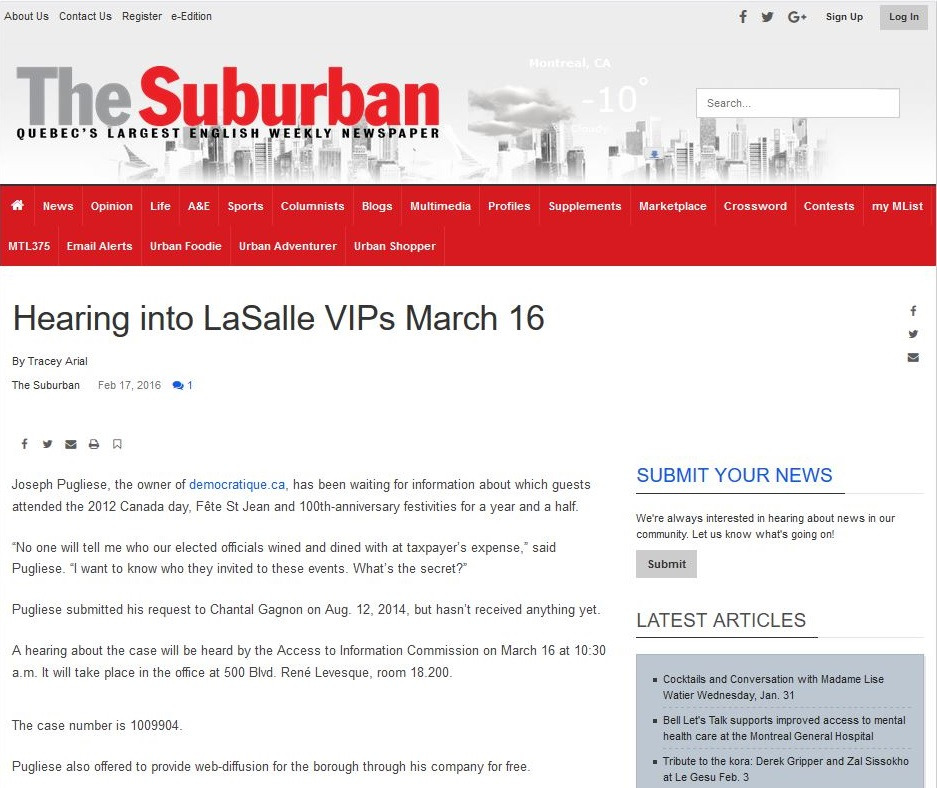 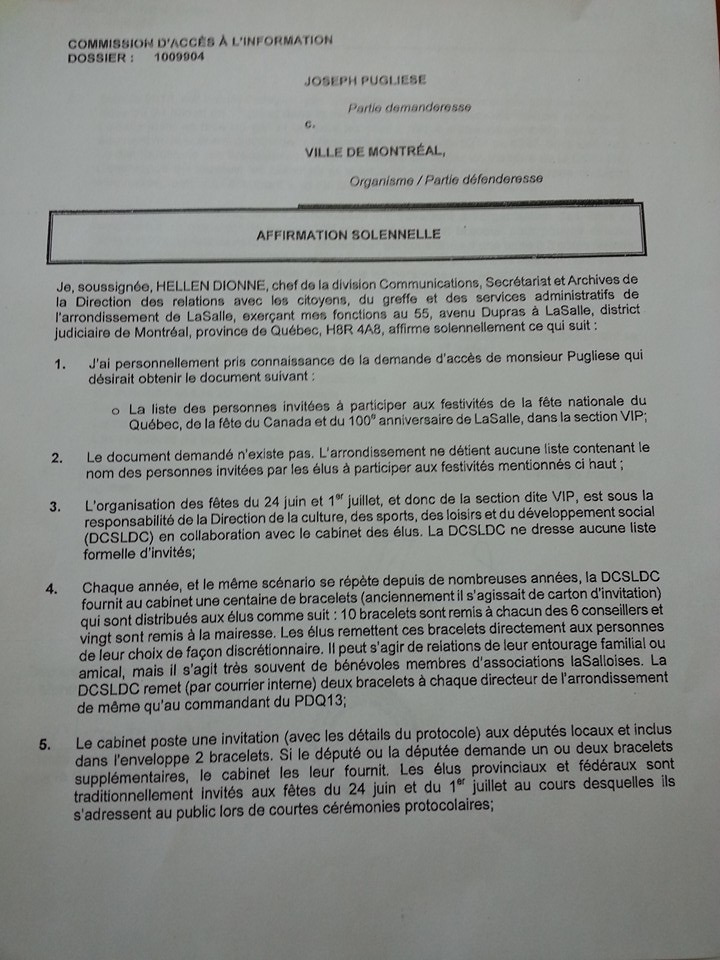 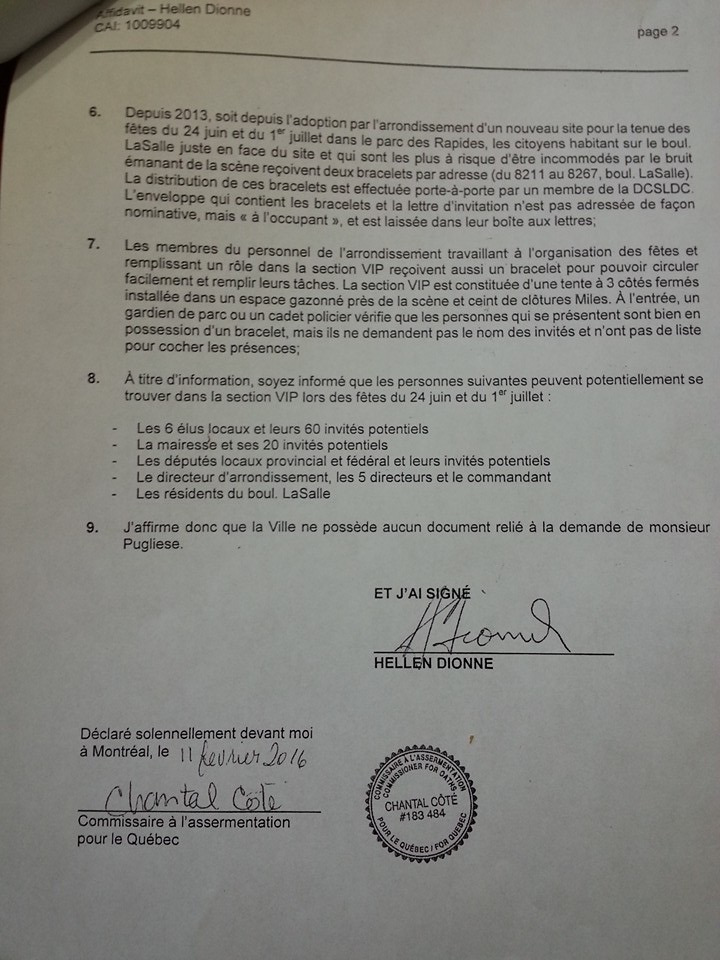 DO GOVERN YOURSELVES ACCORDINGLY,

THE PUPPET MASTERS HIDDEN AGENDA IS ABOUT TO BE

FULLY EXPOSED TO THE PUBLIC !!!

YOU HAVE OUR WORD!!!

DEMOCRATIQUE.CA WILL MAKE IT HAPPEN!!!

PLEASE KEEP POSTED FOR MORE TO FOLLOW REGARDING THIS CASE. 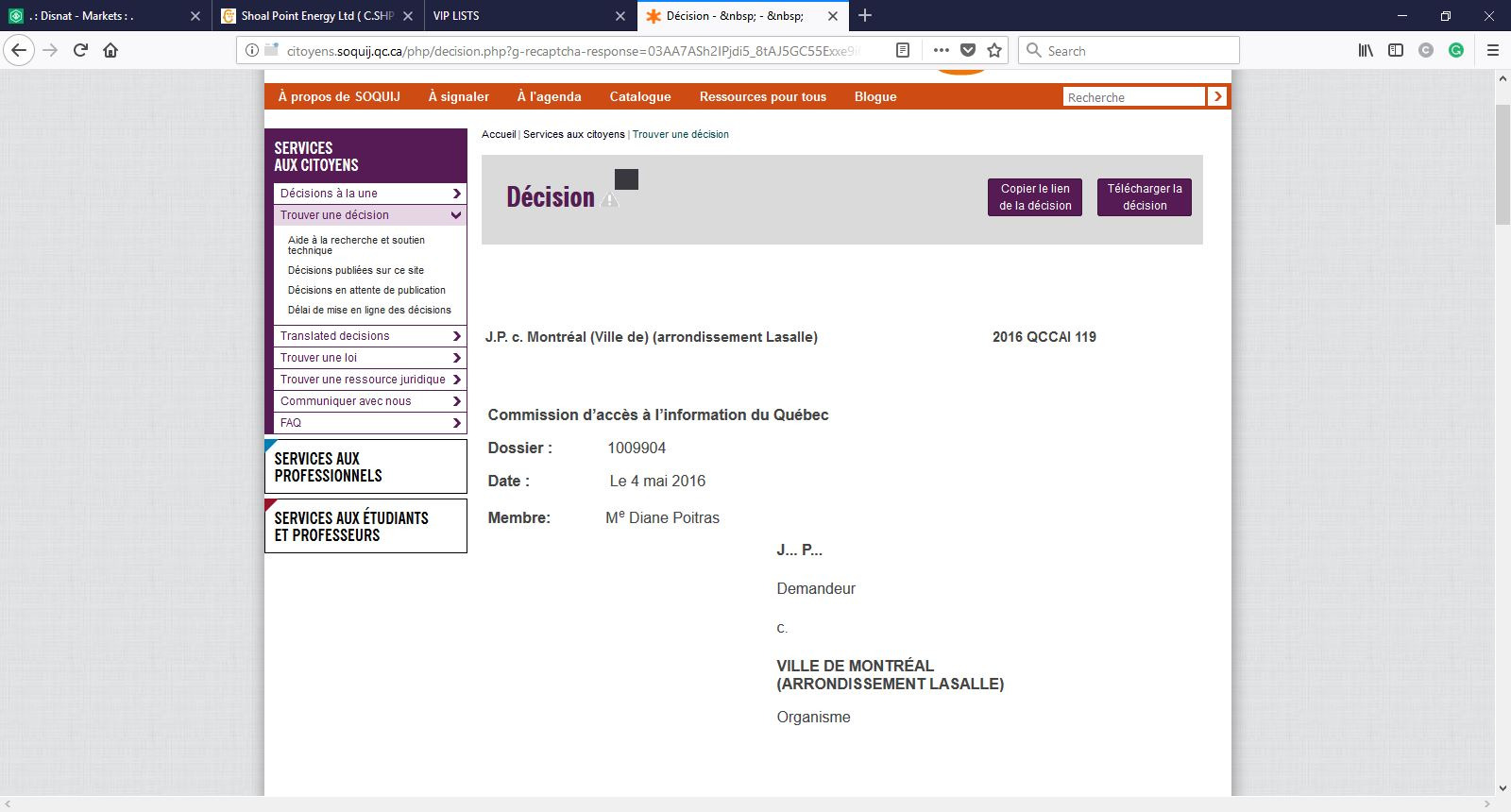 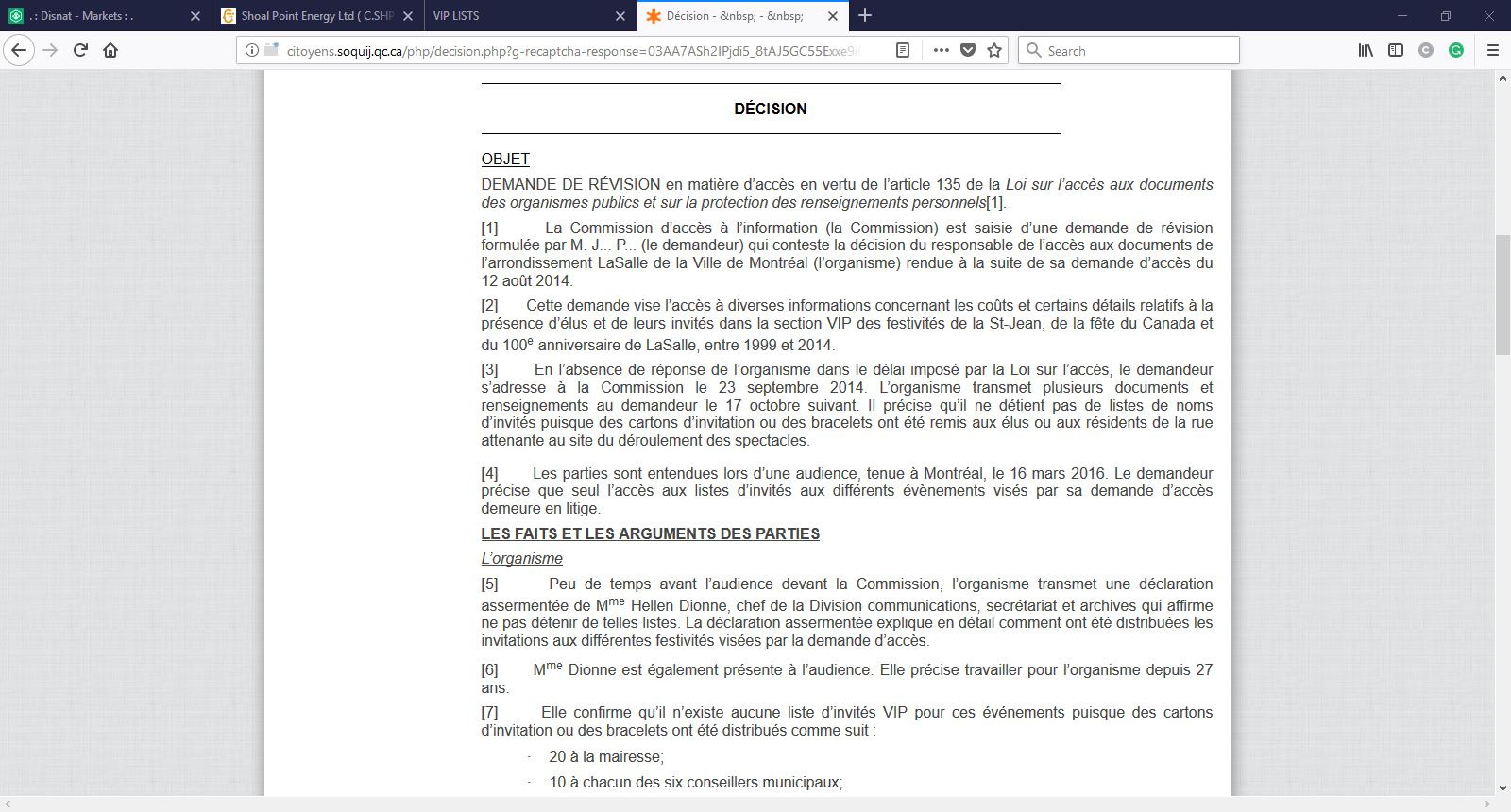 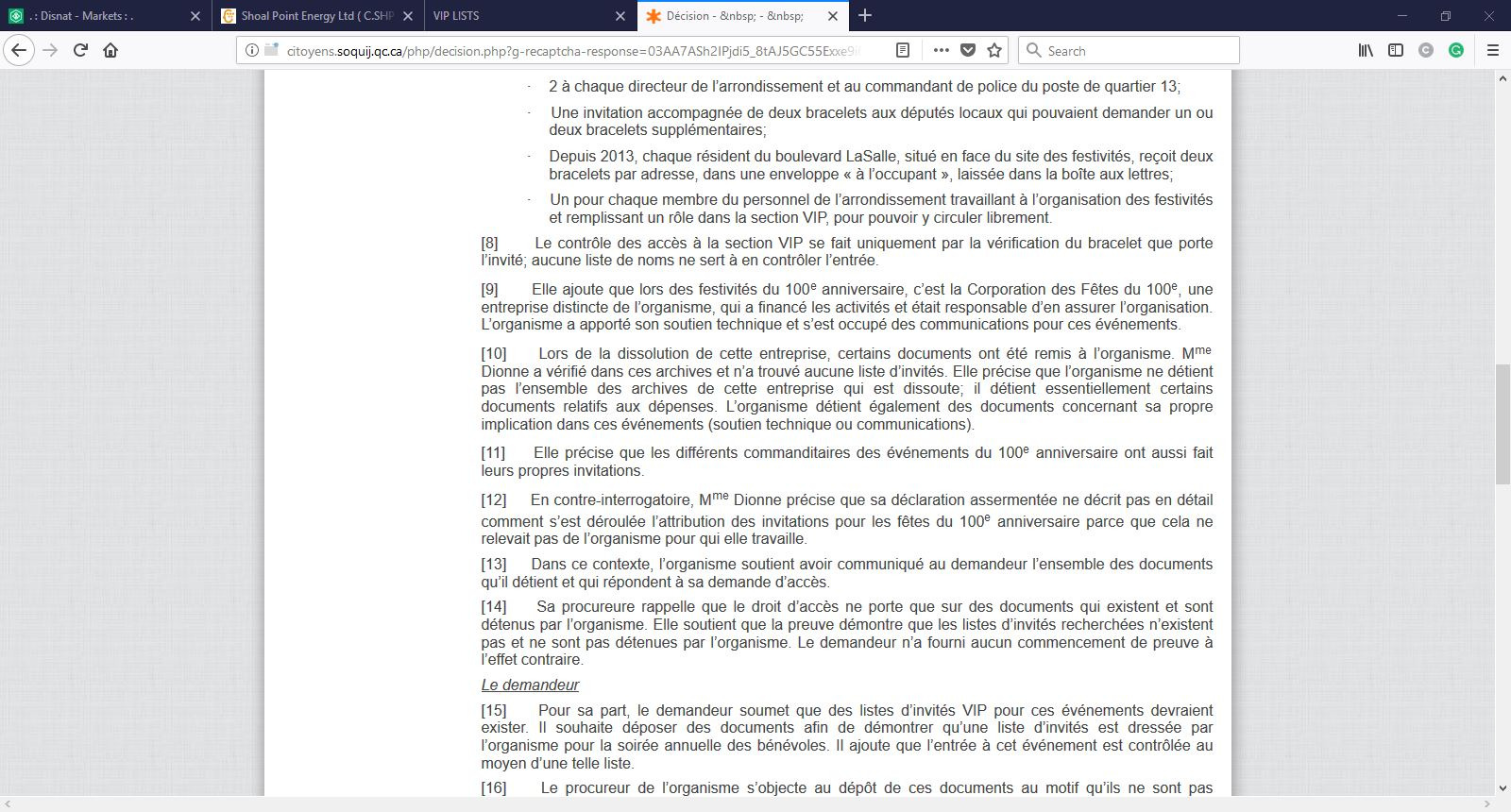 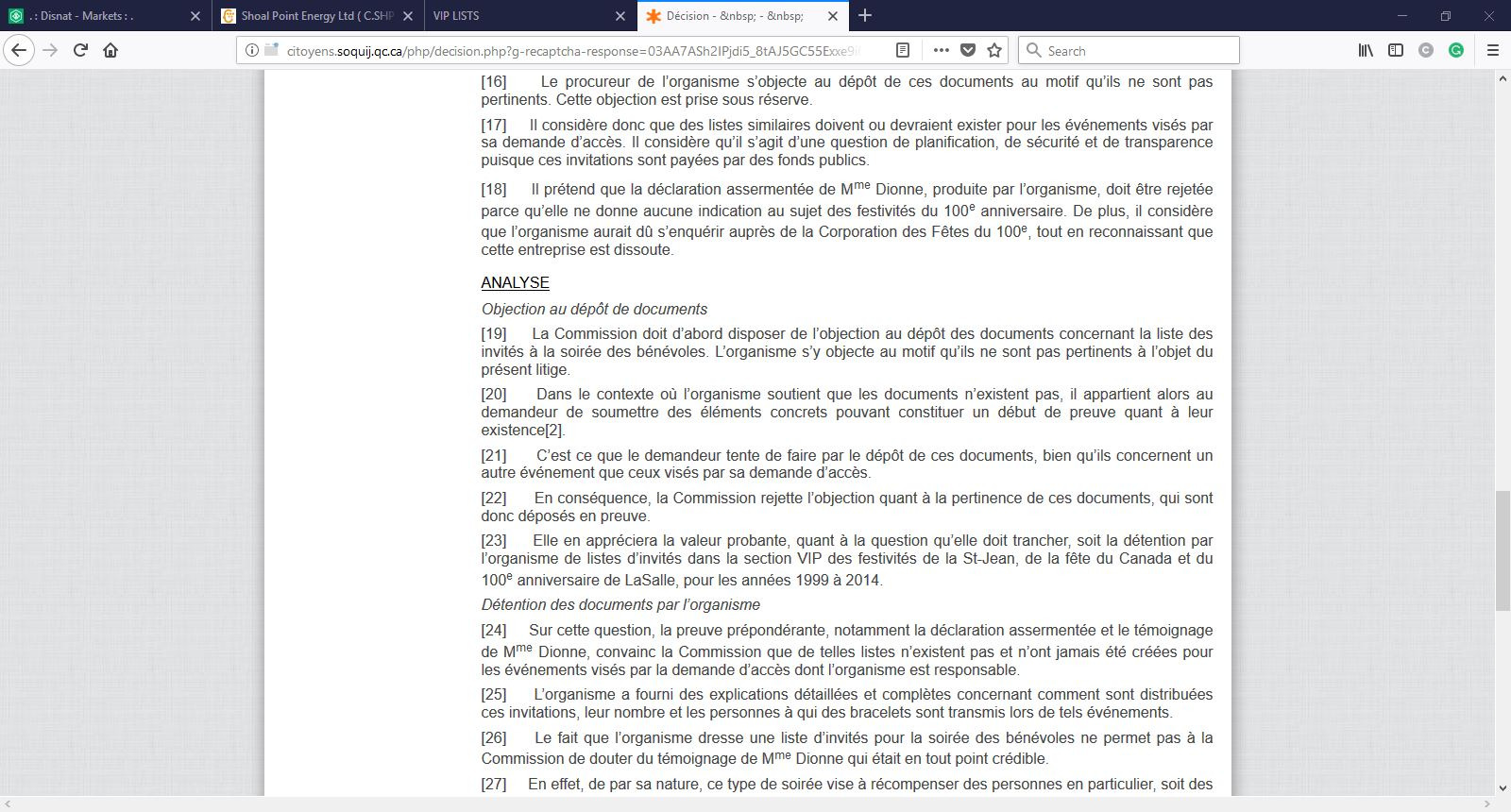 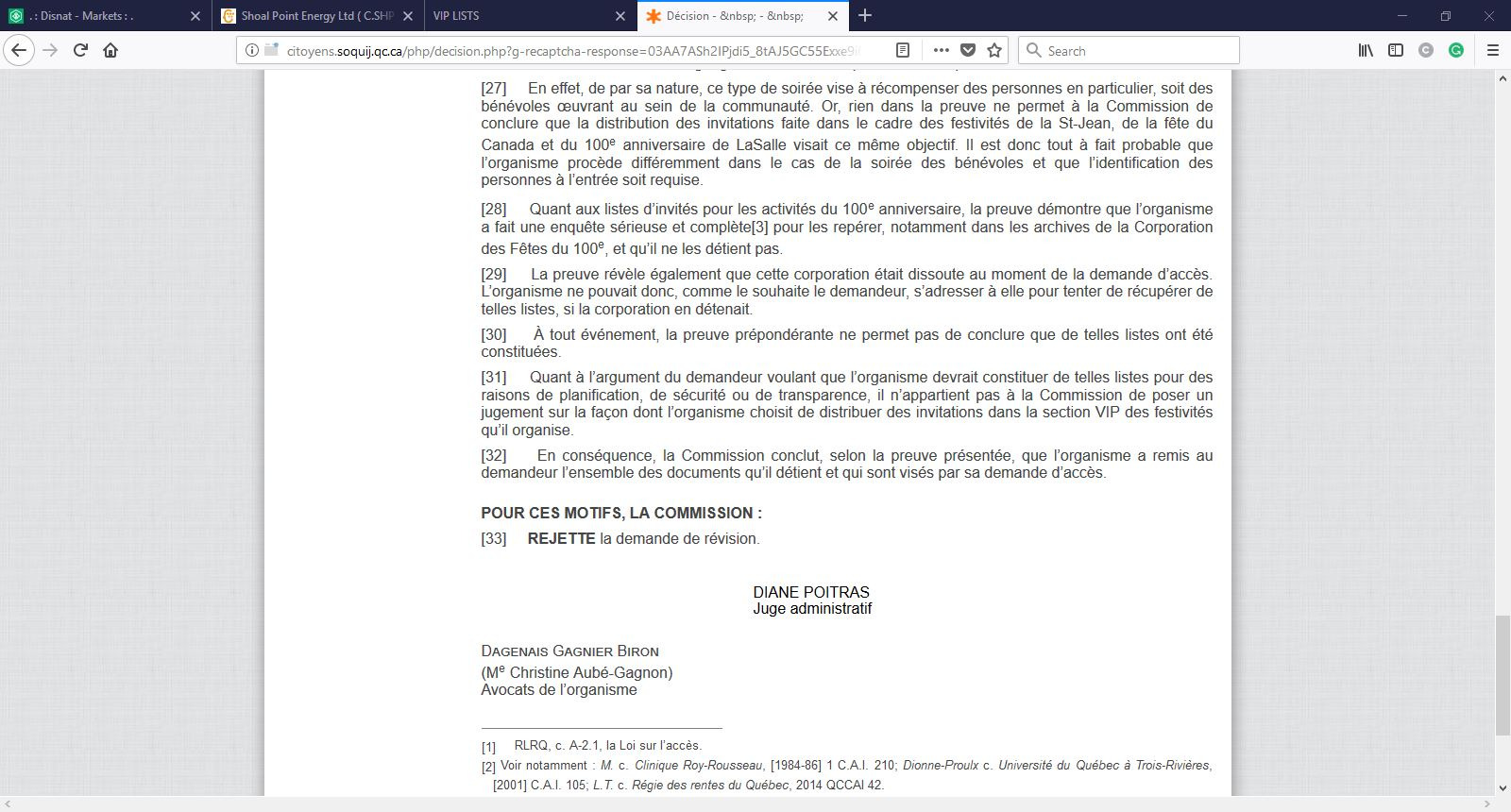 Fair dealing is a statutory exception to copyright infringement and is also referred to as a user's right (as opposed to an owner's right). According to the Supreme Court of Canada, it is more than a simple defense; it is an integral part of the Copyright Act of Canada, providing a balance between the rights of owners and users. To qualify under the fair dealing exception, the dealing must be for a purpose enumerated in sections 29, 29.1 or 29.2 of the Copyright Act of Canada (research, private study, education, parody, satire, criticism or review and news reporting), and the dealing must be considered fair as per the criteria established by the Supreme Court of Canada. 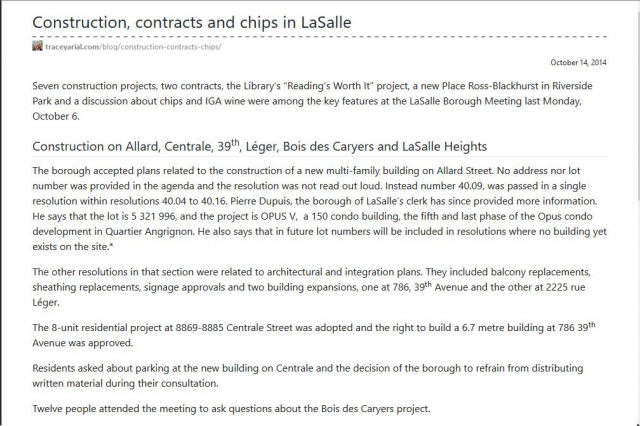 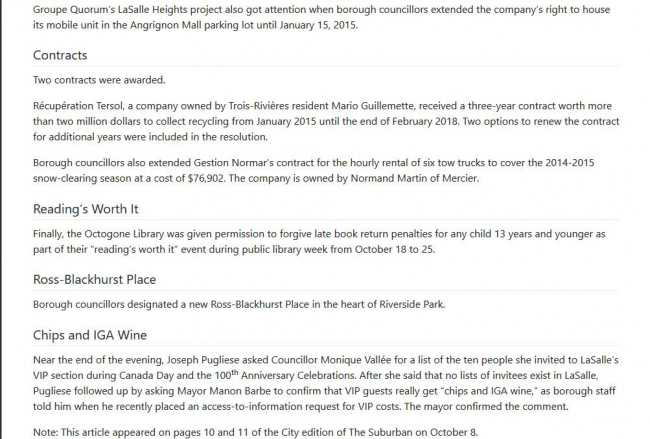 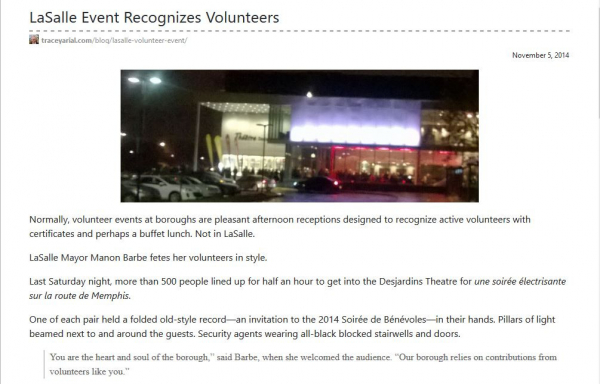 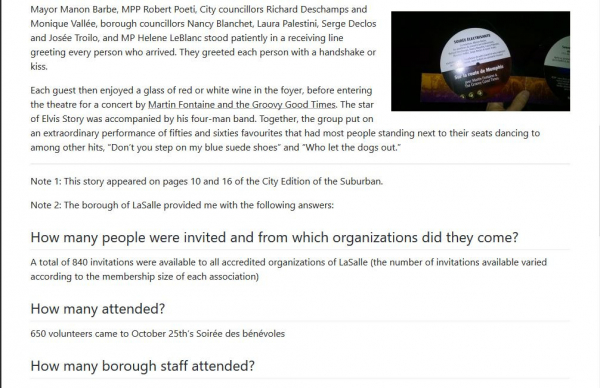 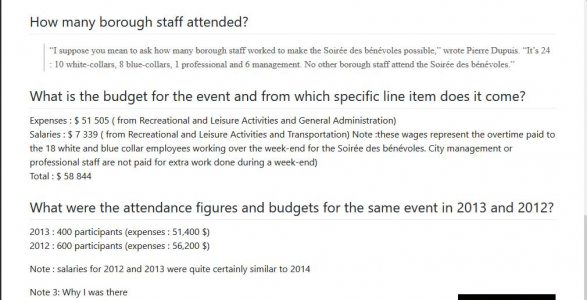