Our ongoing investigation into the VIP lists, including the massive spending of taxpayer

dollars surrounding the 375th Anniversary celebrations, is coming to a conclusion.

With the celebrations now over, the time has come to calculate the total costs.

Rest assured that we have gained significant ground in our pursuit of the truth.

Expect a complete report regarding the VIP lists and total taxpayer dollars spent.

DEMOCRATIQUE.CA INC. will be publishing this press release in due course.

DEMOCRATIQUE.CA INC. attends the Montreal City Council meeting. At this meeting, our newly elected council confirms that they are researching the legality of publishing the 375th anniversary VIP lists. The VIP lists include the names of all VIP guests invited by our elected officials to these events.

Should the laws permit, the council also confirms their full commitment to publish these lists.

DEMOCRATIQUE.CA INC. is pleased that the Montreal City Council is actively reviewing our case.

We are confident that total transparency will be attained in this case.

In the meantime, we will continue to work tirelessly towards a conclusion.

To view our latest public interventions, click on the videos above.

They have cordially refused (in writing) to disclose the VIP lists and total costs.

La Société des Célebrations du 375e Anniversaire de Montréal claims that  DEMOCRATIQUE.CA INC. did not properly formulate our access to information request. They believe that the laws in Québec surrounding access to documents and personal information held by public bodies do not apply in this case.

In short, the organization believes that they can refuse access to information with respect to how our taxpayer dollars are spent to administer the 375th Anniversary!!!

In our access to information request, (April 2017), we requested the total costs to the taxpayers of Montréal for the 375th-anniversary celebrations, including the lists of all VIP guests invited

by our elected officials to 375th-anniversary celebration parties.

publishing a full report of all activities related to the 375th Anniversary Celebration in due course.

It is not clear what they plan to publish in this report, or when.

We expedited a very simple and straightforward request.

There should be no confusion as to what we are requesting, and why. 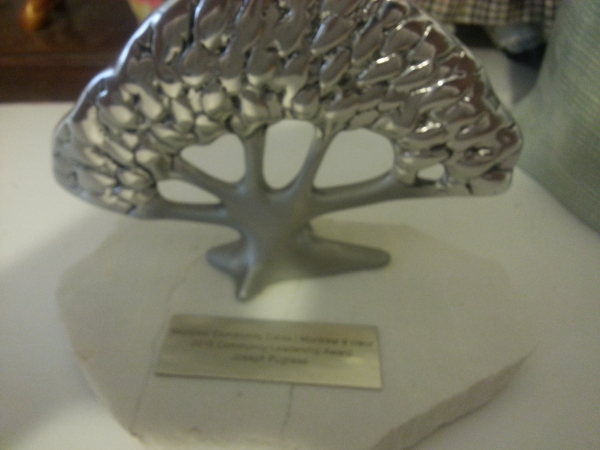 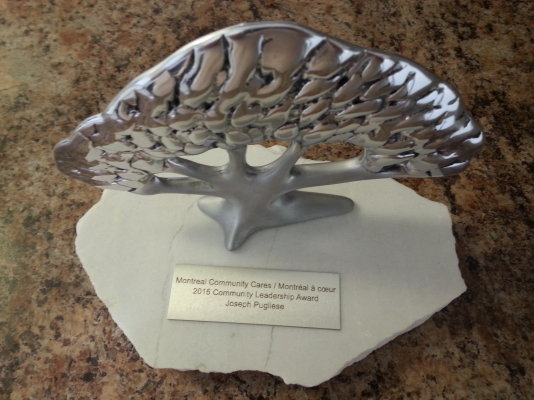 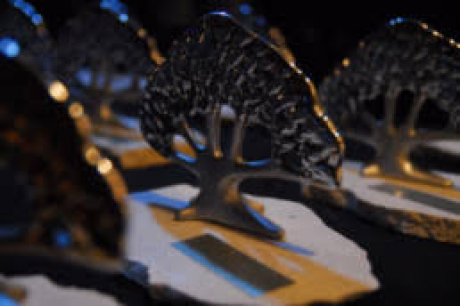 (The reply to our access to information request in French). 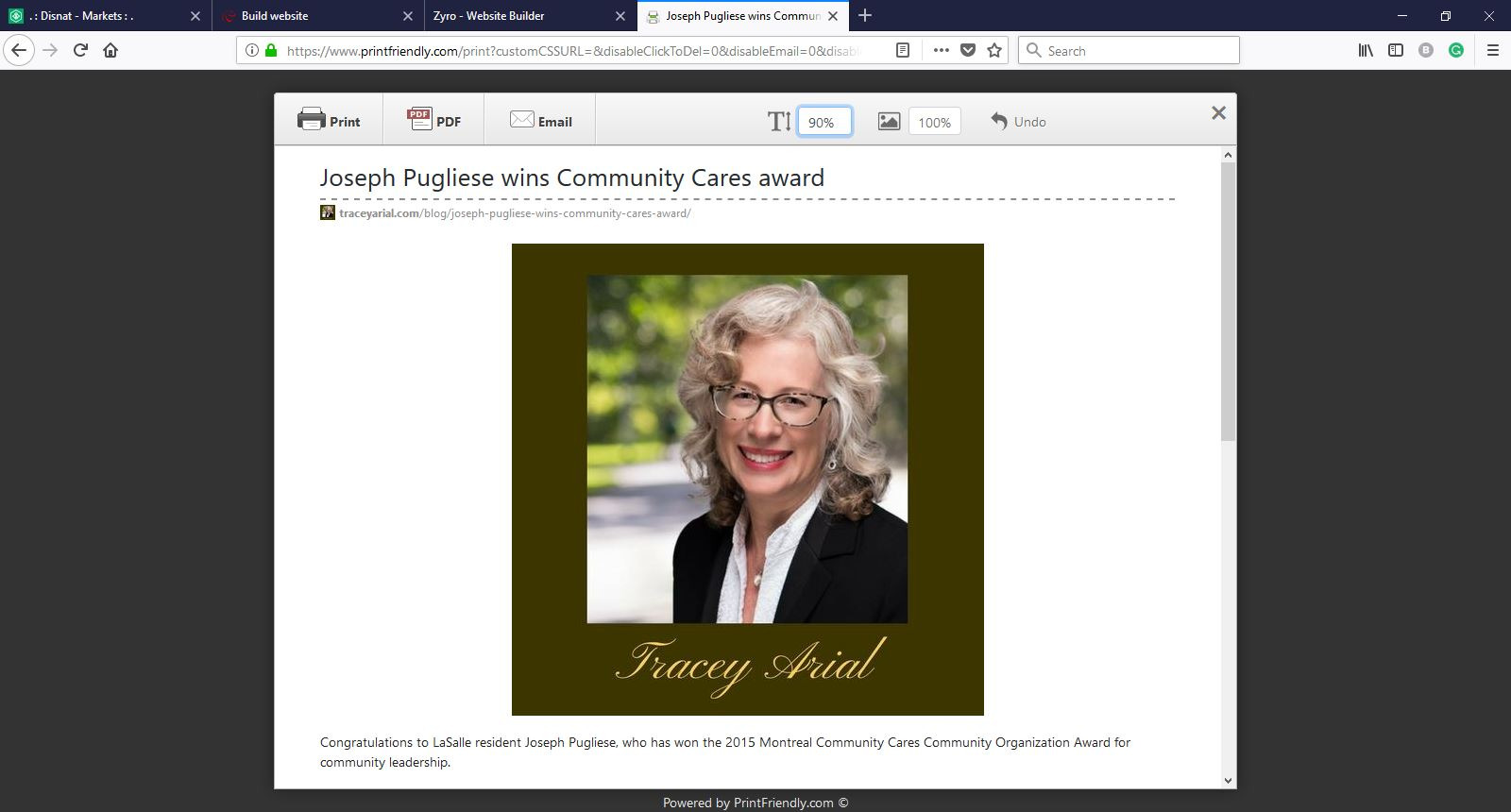 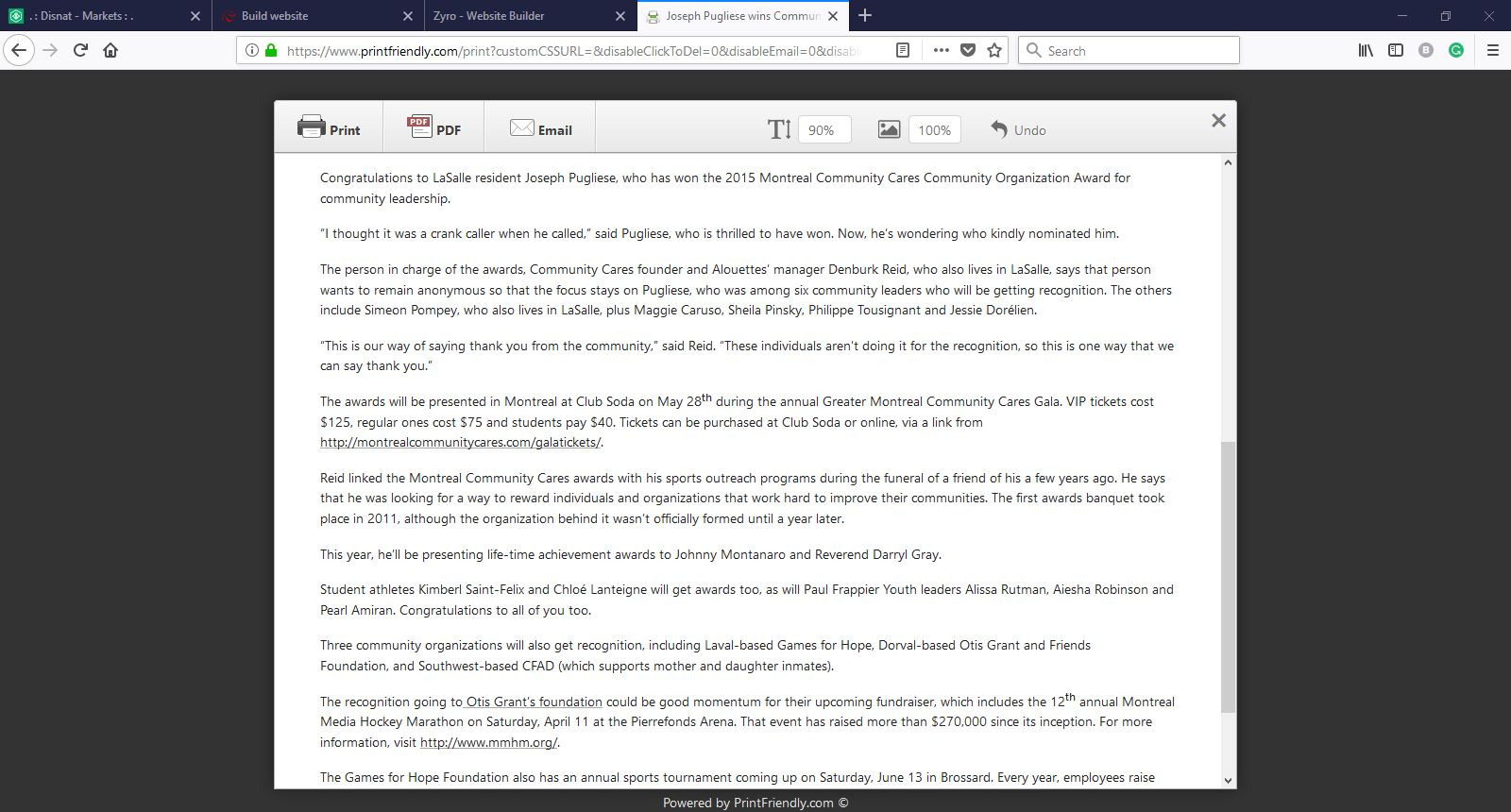 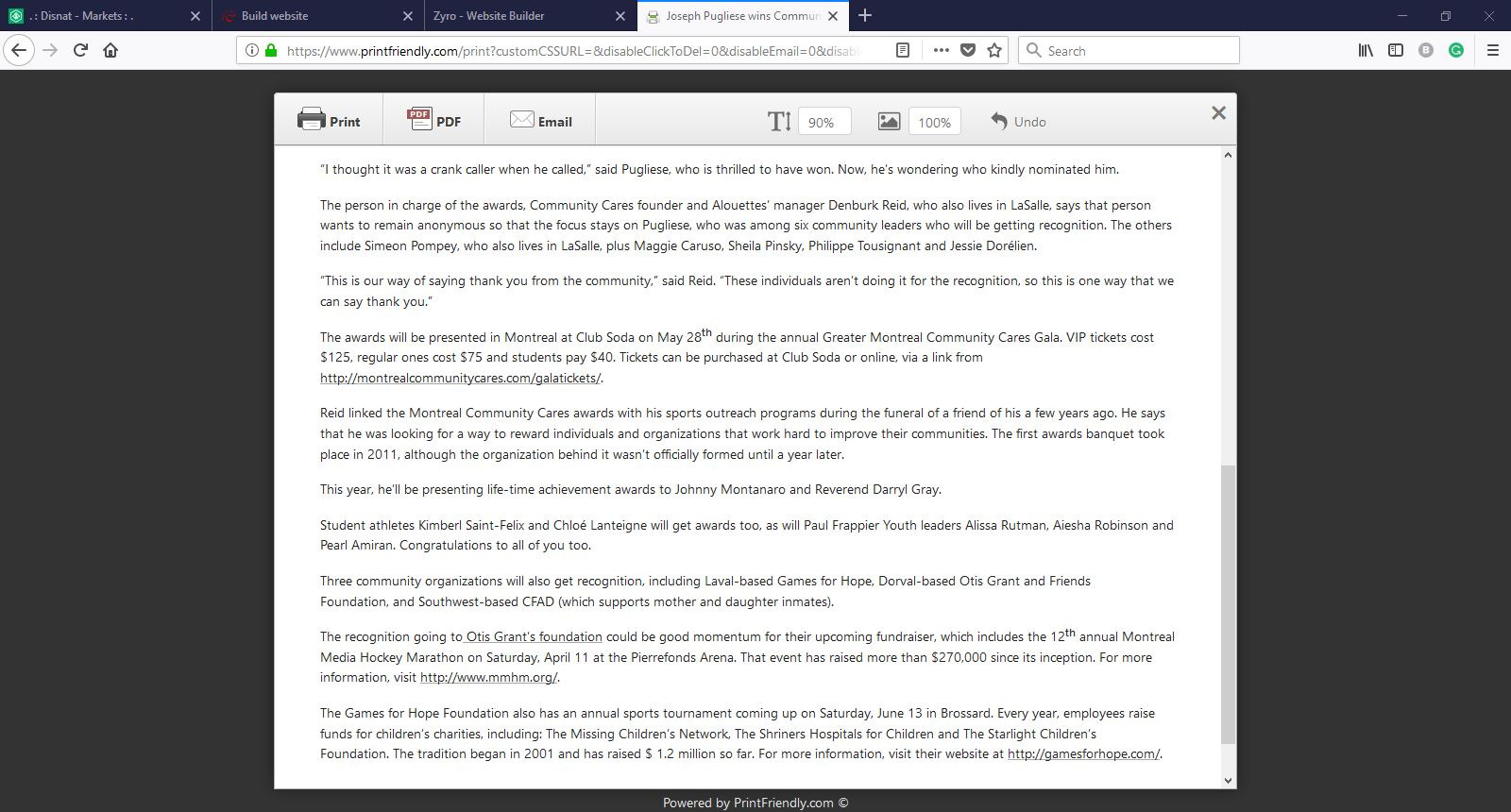 For more information regarding the Montreal Community Cares Foundation, please visit their website by clicking on the images above.

We would like to take this moment to cordially thank Ms.Tracey Arial and The Suburban Newspaper

for reporting on the facts, all while bravely going where many other media dare to follow.

Joseph Pugliese. DEMOCRATIQUE.CA INC. is very grateful for all the work that Tracey Arial

and The Suburban Newspaper performed in helping expose our cases to the general public.

Tracey Arial is a reporter with The Suburban Newspaper, an independent writer, and author.

across LaSalle, Verdun, Montreal, and other cities.

Exploring the world through words

Should you decline to agree to these terms and conditions, DEMOCRATIQUE.CA INC. politely requests

Fair dealing is a statutory exception to copyright infringement and is also referred to as a user's right (as opposed to an owner's right). According to the Supreme Court of Canada, it is more than a simple defense; it is an integral part of the Copyright Act of Canada, providing a balance between the rights of owners and users. To qualify under the fair dealing exception, the dealing must be for a purpose enumerated in sections 29, 29.1 or 29.2 of the Copyright Act of Canada (research, private study, education, parody, satire,criticism or review and news reporting), and the dealing must be considered fair as per the criteria established by the Supreme Court of Canada.

On January 7, 2019, DEMOCRATIQUE.CA INC. expedited an official request to the attention of

Québec Premier François Legault. In this request, we ask the Premier to PUBLICLY disclose the

THE GOVERNMENT OF QUEBEC IS STILL PLAYING POLITICS WITH THE RELEASE OF THIS REPORT.

WILL WE, THE CITIZENS, BE LEFT WITH NO CHOICE THAN TO SEEK ALL LEGAL REMEDIES AVAILABLE?

WE, THE CITIZENS, deserve to know the UNCENSORED TRUTH that is shadowed within this

"CONFIDENTIAL" report, especially the total volume of toxins found at this LaSalle site.

To know more about this EXCLUSIVE CASE, including how

A great man AND BEST FRIEND that will forever be missed. 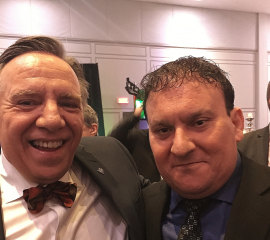 DEMOCRATIQUE.CA INC. has expedited our official access to information request to Montreal City Hall.  This request is a follow-up to our February 19, 2018 question regarding full disclosure of these VIP lists.

was dated January 14, 2019. One must assume that no one watched the videos on www.democratique.ca surrounding the 375th ANNIVERSARY VIP LIST CASE.

April 2017: Did anyone hear what Ms. Valerie Plante had to say about MAYOR CODERRE “doing some pirouettes” around the VIP lists??? This was before she was elected Mayor of Montreal. Did anyone equally hear Ms.Valerie Plante state that she would disclose the 375th Anniversary VIP lists if she has them??? Once again,

this was said in April 2017, before she was elected mayor. WE WELCOME EVERYONE TO VIEW ALL THREE VIDEOS BELOW.  PREPARE TO BE AMAZED......

Are we seeing a repetition of the LaSalle VIP case??? Has it become a culture in Québec politics to use public money to entertain elected officials and their VIP’s?

Why do our elected officials allocate public money through private corporations such as La Société des Célebrations du 375e Anniversaire de Montréal, to administer taxpayer-funded events??? THE SAME THING HAPPENED IN OUR LASALLE VIP CASE. This type of culture creates very dangerous precedent whereas our elected officials can play the “personal information laws” card when asked to disclose which VIP’s our taxpayer dollars are being spent on.  At least one thing is certain,

These lists contain the names of all our elected officials, including all their VIP guests who attended the 375th Anniversary Celebration events as VIP’s.

Lest we never forget how these events are paid for with taxpayer dollars!  Did we change 4 quarters for a loonie in Montreal?

Public money was spent to entertain our elected officials and their VIP guests at all 375th Anniversary Celebrations.

Public money is still being used to entertain mystery VIP’s?

One must assume that in 2019, our elected officials still feel that it’s in their best interests to keep these VIP lists CONFIDENTIAL.

Is it safe to say that our elected officials DO NOT WANT THE PUBLIC TO KNOW who they invite as VIP guests to taxpayer-funded events?

Are they hiding something, someone, or many persons? ALL the answers are etched within these MYSTERY VIP LISTS!

Do govern yourselves accordingly. Rest assured that the 375th Anniversary VIP lists will be made PUBLIC!

You have our word!!!

WOW!!! IT APPEARS THAT OUR ELECTED OFFICIALS AND THEIR "MYSTERY VIP GUESTS" 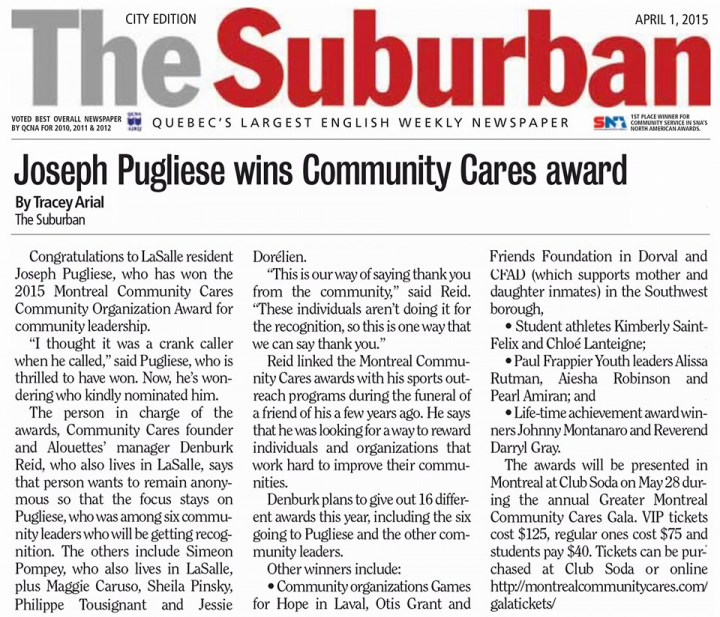 With regards to judicial review of the Montreal 375th Anniversary Celebrations VIP List Case, We are pleased to announce that we we will hosting a press conference in the very near future.

Rest assured that we will announce the date

of our press conference in the days to follow.

To listen to DEMOCRATIQUE.CA INC'S "exclusive interview" regarding "LES DEUX DOSSIERS", and our "MONTREAL 375TH ANNIVERSARY VIP CASE", click on the media player.

STAY SAFE! For all information relating to COVID-19 in Quebec, please visit:  https://www.quebec.ca/en/

"LET US ALL PROTECT AND CARE FOR EACH OTHER,

LET US ALL DO OUR PART TO "FLATTEN THE CURVE"

UNITED, WE WILL ALL GET THROUGH THIS.

RISEN, ONLY TO DECLARE WAR ON UN-PAID STUDENT DEBT DURING THIS DEADLY COVID-19 PANDEMIC?

With two years of deafening silence under the Legault government's belt in "LES DEUX DOSSIERS", and following a very brief pause (April-October 2020) from collecting un-paid student loans in light of COVID-19,

It seems as if the government of Quebec has resumed with the collection of un-paid student loans AGAIN.

IF SO, HOW MUCH IS OUR GOVERNMENT SPENDING TO PURSUE STUDENT LOAN DEBTORS DURING COVID-19?

LEST WE FORGET THAT THIS PANDEMIC HAS AND WILL PUT MANY MORE PEOPLE INTO FINANCIAL RUIN.

With all the uncertainty, hardship and stress many students are facing, including many good citizens across Quebec that cannot even afford to pay for essential goods, is OUR government choosing revenue over aid?

IF SO, AND WITH ALL DUE RESPECT, PREMIER LEGAULT, do you recall our "un-answered" written requests, following our discussions with you personally in 2018, whereby democratique.ca inc. requested that the government write-off all student loans for all debtors living on or below the poverty line? "ABSOLUMENT"?

Has the Government of Québec threatened to sue you for unpaid student loans during this on-going COVID-19 pandemic? Are you unable to repay these loans?  Is the government pursuing you? HAVE YOUR SAY BY CONTACTING US TODAY!!!

We are pleased to announce our newest initiative.

In light of our elected officials conduct during this ongoing COVID-19 pandemic, do you agree or disagree that the time has come to consider that We,The Citizens, DEMAND that immediate action be taken to DEFUND POLITICS at every level?